As well as exploring the world of Fantasy Fiction, Jonathan from Warwick Library has also been delving into the world of Non-Fiction. He’s read/listened to some titles in our BorrowBox collection. Here are his thoughts on the matter:

How can you compare Non-Fiction to Fiction? Where’s the enjoyment without suspense, crazy characters and worlds to stretch our imagination? Non-Fiction is all dusty academic textbooks that come out of hiding once a year, normally the night before that final exam. Maybe not! After giving Non-Fiction a go again, it has opened up a whole new world for me.

I can get a lot from Non-Fiction by just dipping into it for five minutes. To really get into Fiction, I have to spend longer on it, chewing it through my mind. Whilst I can dip into and snack off Non-Fiction, I see Fiction as more of a meal that you really have to get into.

I am able to read Non-Fiction whilst doing other things such as watching the football. Now that the Premier League season has started it’s ideal. If your team are on bad form like Aston Villa, then reading a Non-Fiction book as well means it doesn’t feel like a waste of time afterwards.

Non-Fiction is also easier to listen to when travelling on the train, though you have to be on your guard against spilling your coffee or missing your stop if you find you’re submerged in the text.

I also find Non-Fiction much easier to listen to on audio book. I do not have to absorb every single word to keep up with what’s happening. My level of engagement can dip up and down yet I still enjoy it.

Anyway, enough talking for now. Let me share with you what I have found so appealing about the Non-Fiction books I have read recently. 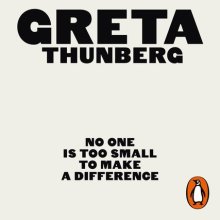 This was a quick book to read – it’s only 68 pages long. Just long enough to enjoy with a cappuccino. After seeing Greta regularly on the news and being interested in the environment, I was intrigued to read this. The book is cleverly put together with a chapter for each of Greta’s speeches at climate rallies dating from 8th September 2018 in Stockholm to a speech she gave at the Houses of Parliament in the UK on 23rd April 2019. Word for word, it tells you exactly what Greta said at each event.

What I found particularly interesting was how Greta talks about why she felt compelled to start her school strikes outside the Swedish Houses of Parliament. She acted completely on her own initiative, without the support of anyone else to begin with. She must have had loads of willpower. It is amazing to see how, from such humble beginnings, Greta grew into an internationally renowned campaigner.

I found Greta’s straightforward black and white manner and writing style gets her point across about the urgent danger of climate change. Her analogy of ‘your house is on fire’ is particularly powerful. She conveys the urgency of the situation by highlighting the short timescales we have to stop the unavoidable effects of climate change.

The New Silk Roads: The Present and Future of the World by Peter Frankopan (eAudio) 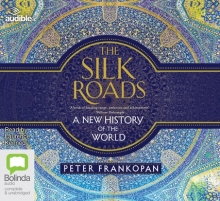 I studied Human Geography for my undergraduate degree and found this book offered a fascinating perspective of global trends. Much change and development is happening across the world that goes completely unnoticed with the news mainly focusing on what happens in the West. Before reading this book, I had heard of the historical Silk Roads from China and Central Asia, but did not think of it in the present day. I regarded the Silk Road as a linear path connecting China to Europe, but in reality many more countries are intertwined together economically and politically than I ever realised.

Countries covering a huge area of Asia, Africa, the Middle East and Oceania in recent years have been cooperating together, building economic partnerships and unions. The rate of growth and development in many of these countries has been amazing. What really struck me was that some of the countries Frankopan discussed are much bigger and influential than I ever thought.

With a population of 273.5 million, Indonesia is the fourth highest populated country in the world and is classed as a newly industrialised country (NIC). The list of ‘NICs’ also includes Thailand, Philippines, Malaysia, India and China. A theme in this book is that whilst Silk Road Countries in recent years have sought cooperation and partnerships, Western European Countries and America have followed the path of isolationism. Peter Frankopan argues this will have a drastic effect on how the future world looks.

Here I must make a small confession – not all of the Non-Fiction that I have been reading has come from BorrowBox. That’s not to say there isn’t a great selection available for you to browse but there were a few titles that I found elsewhere that I have also enjoyed so thought I would tell you about them too.

Adventures of a Young Naturalist by David Attenborough

This book I found gripping once I got into it. There are three different diary accounts of trips that Attenborough went on in the 1950s, to Guyana, Indonesia and Paraguay. Before reading the book, I assumed the trips would be similar to the wildlife documentaries of today with slightly worse technology to hand. I was wrong! The trips were ‘Zoo Quest’ expeditions, aiming to capture exotic animals in remote corners of the world to take back to zoos in the UK.

The book also covers Attenborough’s early TV career. Rather than film documentaries out in the wild like today, wildlife programmes were live on air in TV studios back in the 1950s, rather than being pre-recorded. Attenborough reminisces about live programmes featuring London Zoo keeper George Cansdale at Alexandra Palace. Part of the popularity was the unexpected happening including an African Squirrel escaping and living in the ventilation system for days. Interestingly, Attenborough got into presenting standing in for a colleague who became very ill. We all know what happened with Attenborough’s career next.

As the winner of the October 2017 ‘Leamington & Warwick Park Tennis League Division 3’, I found learning about the lower reaches of the professional tennis tour fascinating. Gregory Howe gave up his usual 9-5 job and pursued a year on the professional tour despite being well into his 30s. On TV, you only hear about the very top of the game, but there are tournaments worldwide for professional players outside not just the top 100, but the top 1000. Unlike the cream of Wimbledon these players do not earn megabucks and have to continually fly around the world in the search of rankings points.

The lower end professional tournaments are just about anywhere you can imagine and also where you can’t imagine. What I really like about this book is the sense of daring and risk in it. It is amazing how the result of just one game of tennis can be so make-or-break for aspiring tennis players.

After my reading was done …..

After reading these books I felt that I wanted to learn more about the topics that really interested me. This included countries I knew only a little about such as Indonesia as well as Central Asian countries on the Silk Road such as Kyrgyzstan and Tajikistan.

Rather than simply Googling, I decided to use some of the eInformation resources we have in the Warwickshire Libraries digital library to gain further insight.

I highly recommend Encyclopaedia Britannica which is freely accessible to Warwickshire Libraries members. If logging on from home, you can use your Library Card number to log in. You can search for information at three different levels – Junior, Student or Adult.

The information about each country is displayed in a visually appealing way and is very informative. I noticed as well that there are links to additional reading and articles. The article reading level option is really handy. If you want to read a very brief overview, Level One does just that. Level three in contrast goes into great depth, giving you a very extensive overview.

Another feature that is also really useful to explore is checking out related articles. For example, when I searched for ‘Tajikistan’, I could also find links to related articles about neighbouring countries, cities and political systems. Look for the ‘Related’ tab near the top of the page.

This website gives a really comprehensive overview of countries. What I really like is that there are many different topics – you can select from on a drop down list such as Geography, Government, People & Society and Economy. By reading the entry on Indonesia, I found out many facts that supplemented what I had read by Attenborough.

Animalia is not linked to the Warwickshire Libraries website but I recommend giving it a browse. When reading David Attenborough’s book, there was often animals mentioned which I knew very little about. One example was the manatee and being curious, I wanted to learn more. When I searched for the manatee on Animalia, I found a very well put together profile with excellent facts as well as some stunning photos.

Whilst on Animalia I found that as well as searching for specific animals, it was really enjoyable browsing through the collections the site has put together. One I particularly liked was the ‘Urban Wildlife’ collection as I was drawn to the picture of the squirrel.

I hope that you have fun exploring the world of Non-Fiction. Let us know your recommendations in the comments.

If you’re new to using BorrowBox, we have a ‘BorrowBox Basics‘ video available here and a ‘Tips & Tricks‘ video to make sure you’re making the most of our eBooks and eAudio titles.

You can also get in touch by email if you need further assistance with all of our digital resources, including those on our eInformation and Learning page  – email libraryenquiryteam@warwickshire.gov.uk.