After a bit of a hiatus, it’s on to number 3 in the Guardian Non Fiction list – No Logo by Naomi Klein.

There is SO MUCH to say about this brilliant intelligent book, but if you have any interest in the nature of the world, or society, or politics or the economy, I would urge you to read it. Naomi Klein, who since writing this has written loads of other bestselling books (on climate change and President Trump for example) clearly did her research. She cuts through the mysteries of the foggy corporate word and tells you truths, events and controversies that ‘they’ wish you didn’t know. Hang on to your hats because this review – like the book – can’t be anything other than thorough. 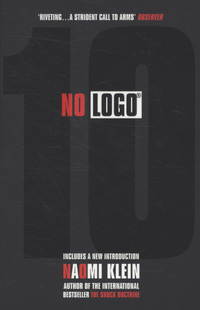 The book is cut into four – the first three focusing on the limitations corporations are imposing on society, those of ‘No Space’, ‘No Choice’ and ‘No Jobs’. The fourth part, ‘No Logo’, is what Klein wants us to focus on – that the struggle between society and corporation is not a one-way street, that there has been a fight-back. I know this is meant to be a review, but the book is so overwhelming (and I’m such a convert to it) that I think brief summaries are a better way to give you an idea of what Klein is trying to say.

In ‘No Space’ Klein introduces us to the concept of the brand. Brands are almost everywhere, not just on billboards, but also on our clothes, in our newspapers, on our public transport. Klein is writing in 2000, before the internet really took off, but I realised that brands are all over our digital lifestyle too – on websites, pop-ups, apps, YouTube. Klein describes how brands are encroaching on our culture. (Is anyone else annoyed about the sudden adverts that have crept into the Duolingo app? They never used to be there!) It’s hard not to look, sometimes reasonably impossible, say if you’re waiting for your programme to continue on a catch-up site, or waiting for your film to start at the cinema. In America it seems a lot more pervasive – there’s Burger King pop-up kiosks in schools for lunch time, and contracts with University sports teams for Nike and Adidas. Brands are also great at taking over the dominant political theme of the day, and using it to further their goals – lots of shops sell Feminist branded clothing – but is this because they believe in it themselves, or they’re just hoping that their focus on equality brings them more custom? Klein would probably incline towards the latter.

In ‘No Choice’, Klein writes about how companies seek to monopolise the market, often using aggressive tactics. She explains how Wal-Mart does this by building huge stores out of town, buying in bulk, then slashing their prices so economically that independent retailers can’t compete. Until it caused controversy, Starbucks were known to intentionally find independent coffee shops in attractive parts of town, and offer the landlord a better deal to rent the same or similar space. Corporate censorship has also enabled companies to stifle diversity. In 1993 Wal-Mart, who at the time represented a 10% share in music sales, forced Nirvana to change their album artwork for In Utero, because its depiction of foetuses did not conform to their family-friendly brand. Klein also mentions mergers as a way of stymieing competition, and we have our own example – of Rupert Murdoch trying to take over Sky in January. He failed to do so, and the Authority that stopped him said that his company’s ‘news outlets are watched, read or heard by nearly a third of the UK’s population’ already, and that his merger with Sky would result in ‘too much control over news providers …and therefore too much influence over public opinion and the political agenda’. It happens a lot over many different mediums. Disney own ABC, 21st Century Fox, Marvel, Lucasfilm and Pixar; Mars own M&Ms, Twix, Snickers, Galaxy, Starburst, Milky Way and Topic (among others).

In ‘No Jobs’, Klein details that so desperate are these corporations to make money, they will completely neglect and actively seek to weaken their workers’ rights, abroad and at home. We’ve all heard of sweatshops abroad, and Klein visits one in the Philippines. Mostly girls and young women work twelve hour shifts in oppressive and terrible conditions, for $6 a day, or less. ‘Some employers…keep bathrooms padlocked except for two fifteen-minute breaks, during which time all the workers have to sign in and out so management can keep track of their non-productive time…there are rules against talking.’  Back in the admittedly better-off West, Klein writes about a society where full-time contracts are in shorter and shorter supply. One Starbucks worker’s hours are capped at thirty-nine hours, one hour less than the legal ‘full-time’ cut-off, when Starbucks would be obliged to give her more benefits. Corporations it seems, cannot budge an inch.

“If Borders opened 38 new stores a year instead of 40,” a Borders clerk explained to Klein, “they could afford to give us a nice wage increase. On average it costs $7 million to open a superstore…”

“But,” another clerk interrupted, “if you say that directly to them, they say “Well, that’s two markets we don’t get into…. We have to saturate markets… we have to compete.”

In the last part of the book, ‘No Logo’, Klein shows us the other side of the coin, that these difficulties and limitations can be fought against, whether that means refusing to work with corporations, pointing out their abuses, graffitiing their adverts or even taking them to court. Pepsi lost a lot of contracts with USA University campuses after a group of students found out they had links to military regimes. Back when Klein was writing, ‘culture jamming’ was a popular way of getting the anti-establishment or anti-corporate message across. Culture jamming is the practice of ‘parodying advertisements and hijacking billboards’ to carry a drastically different meaning than the one originally intended. In today’s digital age, it doesn’t happen so much, but after the Florida school shooting this February, a billboard advertising a gun was powerfully ‘jammed’ from reading ‘Shoot a .50 caliber for $29’ to ‘Shoot a school kid for $29’. A few days ago Florida passed a new gun-law, so the mood may be changing, if only a little.  Although corporations and brands are powerful, they can be easily and permanently dirtied – the Nestle milk scandal happened in the 1970s and 80s, but I still know people today who refuse to buy Nestle products.

I think the point Klein is making is that it’s worth challenging these businesses, these companies. She really believes that change can be brought about. ‘No Logo’ made me feel pretty cynical, but also a lot wiser about corporate motivation. It also made me despair a little, because how are we to change that? I’m not sure how much we can, but in the last portion of the book, Klein gives examples of how fighting back has produced change. Some of these changes have been pretty small in the grand scheme of things, but if that means, say, that Pepsi stop trading in Burma, or Florida pass a new gun-law, it’s worth it. Something is better than nothing. Klein writes that it’s not always fair or easy, but if it gives more rights and hope and power into the hands of the people, rather than the brands and corporations, then surely that’s worth fighting for.