My Experience – Being Warwickshire’s Young Poet Laureate for 2017

Experiencing the role of Poet Laureate has been only beneficial for me. To fail to realise the amount of potential you have as a young creative, and then be thrown into a scope of opportunities, completely alters your view of what can be achieved. Poetry used to be a rather hidden activity for me, something which I would not talk of, or make people aware of: I would instead write poems in my journal and on paper scraps when inspiration took its toll, but never would I reveal them, let alone recite. Before applying for the Laureate position, I had finally built up a confidence in what I was producing. My poems were taking their own lead, becoming longer and of deeper exploration into the topic of which I was writing. It was refreshing to be able to firstly accept I wanted a future in creative construction, and secondly to be assertive in this knowledge. The realisation of what writing meant in a personal sense became the foundation of what I was yet to put on paper. Within the year of 2017, I have probably written my most so far. This was only encouraged and developed by the team supporting me as Laureate. In receiving a collection of anthologies from those most successful in the poetry world, such as T. S. Eliot; Philip Larkin; and Douglas Dunn, my poetry dipped down various paths, experimenting with rhyme, regularity in structure and the inspection of the individual.

During the contest for the Young Laureate position, both myself and a group of four young poets practised recitals, discussed our work and personal lives, and bonded mostly through our artistic interest. Meeting other poets of my area, within the younger generation, gave me strength in the realisation that unlike my past opinion, I was not the only withdrawn young artist. It comfortingly presented me with a community of creatives, equal to myself. Then came the on-stage recitals: each of the contestants had two personally chosen poems to read aloud. I chose one of my first works, ‘Message to Mankind’, connoting strong feminist undertones. The poem was on a topic I feel very passionate towards, as well as one prominent in the younger generation. It was a pleasure to engage the audience with this, in many ways, I felt as though it was my moment to prove my art was worthwhile of praise. A new pride stored itself in me from that date.

To be formally announced as Young Poet Laureate, I was invited to a reading in Warwick from Emma, a witty poet from the Black Country who aided me in evolving my confidence, alongside mentoring me through the Laureateship. At this event I read two of my poems I had written in 2016. One entitled ‘Where are you? And why aren’t you coming back?’ discussing the loss of a child through the voice of a mother, yet with an underlying point on dependency from both sides in a familial relationship. This poem was, in particular, one of the first poems I felt truly hopeful for. It was close to heart and to home, thus to be able to read this aloud and incite intrigue from an audience was an experience I am grateful for. Reciting my work has had positive effects on me for the long-term, for I understand my developed confidence will assist me in grasping a hold of future aspirations. A later recital took place in Nuneaton, in which the audience was smaller and more personal. Yet, this did not put me under a greater spotlight: I found the action of emergence from a friendly group onto a platform in means to perform a refreshing moment. Previous to my Laureate position, I had recited poetry but never my own. The feel of my words as an audible matter was something very new to me, but in some way, it felt as though I was justifying its meaning with the tone of my voice.

Not only has the position involved recitals, but varied activities depending on what is occurring in the arts scene of Warwickshire. Collaborating with my agent Amy earlier in the year, to develop a crowd-sourced poem from the community of Rugby library, blossomed my communication skills and formed the foundation for my poem ‘Heart of the Community’ (titled from one of the lines provided by a library visitor). I found this activity more personal than recitals; more integrated into society; but this was only valuable. A similar activity I conducted with the appreciated help of Warwickshire Libraries staff Amy (as aforementioned) and Jan. We were freely invited to the Also Festival, in which we manned a ‘poetry tent’ with surrounding tables inviting children, adults and elders to both read and write poetry in the most creative of ways. A crowd-sourced poem took place there too, but the best part of that day in the sun was the engagement with the public about reading and writing. My true experience of being Young Poet Laureate is one of opening my eyes to the surrounding: the opportunities, the artistic nature of society, and the treasure of reciting my work to an audience. 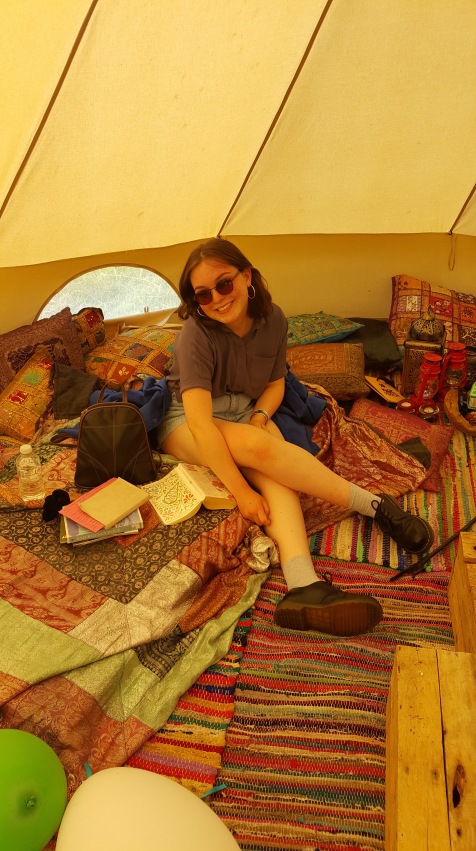